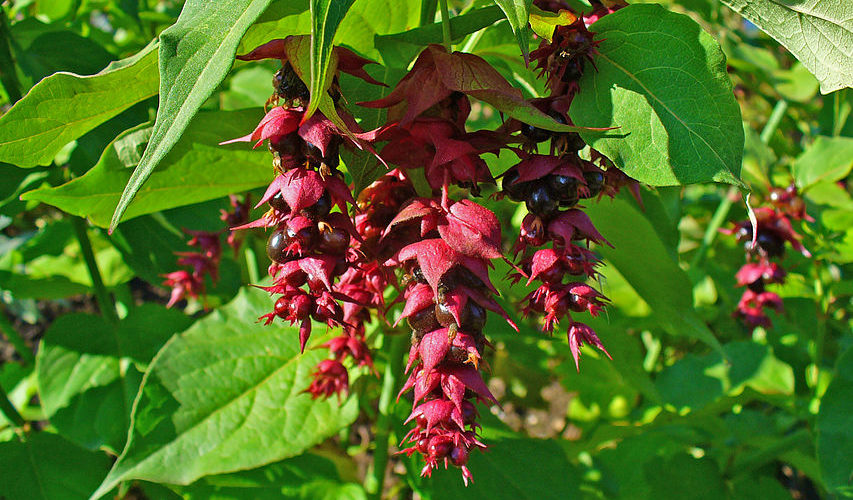 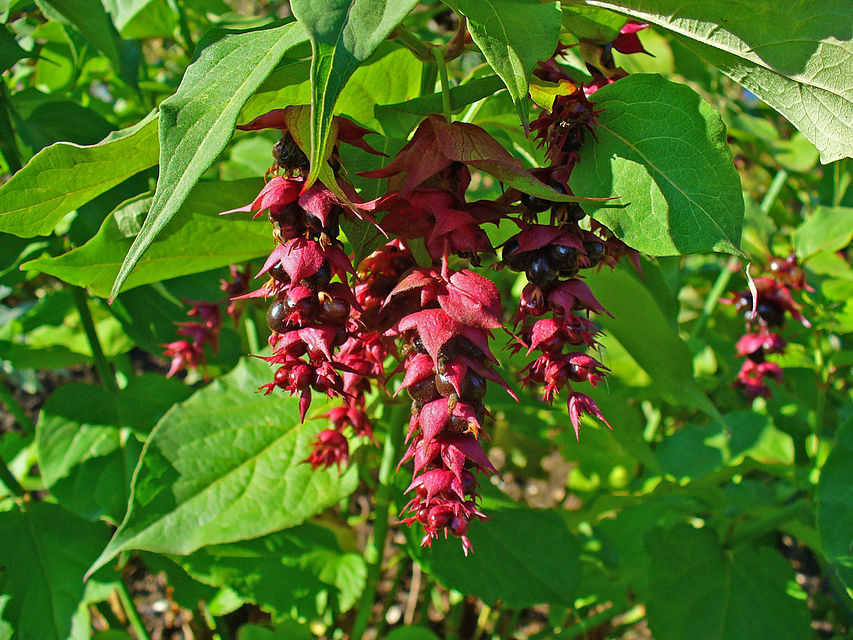 There Leycesteria formosa or Himalayan honeysuckle it is an ornamental flowering shrub that can be grown in the ground in temperate zones, in pots in those characterized by harsh winters with minimum temperatures below – 15 ° C.

General characteristics of the Leycesteria formosa

There Leycesteria formosa is a deciduous perennial plant of the Caprifoliaceae family, native to the Himalayas. It is widespread in a rustic state in all temperate zones of central Asia.

The leaves, 6-18 cm long and 4-9 cm broad, they are ovate or heart-shaped with an entire margin, slightly wavy; they are opposite and with pale green leaves.
they are bright green, and are opposite but there are cultivars with yellow or orange shoots.

THE flowers, gathered in long pendulous inflorescences, they are funnel-shaped, white, delicately perfumed and wrapped in red-purple bracts.

THE fruits they are small ovoid berries, which ripen in October, taking on a purple-blackish color. The berries, due to their pleasant scent and caramelized taste, are very popular with pheasants and other birds. 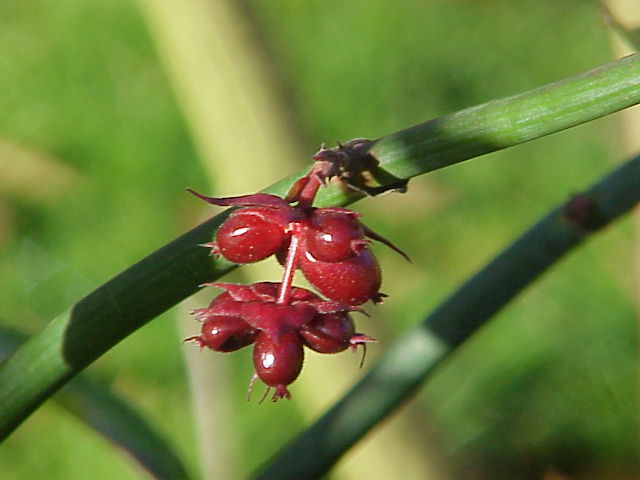 THE seeds they are small and germinable and, if freshly harvested, they can be used for sowing the following spring.

Leycesteria formosa blooms from summer to early autumn, usually from July to September.

Cultivation of the Leycesteria

This plant expands in height and width especially when grown in full sun. In shady places for many hours of the day it not only slows down growth but also produces very few flowers. It tolerates heat well and survives without particular problems at winter temperatures -10 / -15 ° C if well protected at the base with a good mulch of straw or dry leaves or straw and in the event that the winter cold can damage the hollow stems of this plant, don’t worry too much as new shoots will sprout in spring.

It grows well in soft, humus-rich but well-drained soil. In too compact soils the plant suffers from root rot to prevent water stagnation from forming. The ideal substrate is
a mixture of topsoil, dead leaves, sand and earth.

The Leycesteria in the open ground is satisfied with rainwater and needs regular watering only in drought periods when the soil is completely dry. If grown in pots, it should instead be irrigated more frequently throughout the vegetative period, from March to October.

To obtain a compact shrub and abundant flowering, in autumn and spring, the cultivation soil must be enriched with nutrients by administering a well-mature organic fertilizer or slow-release granular fertilizer. 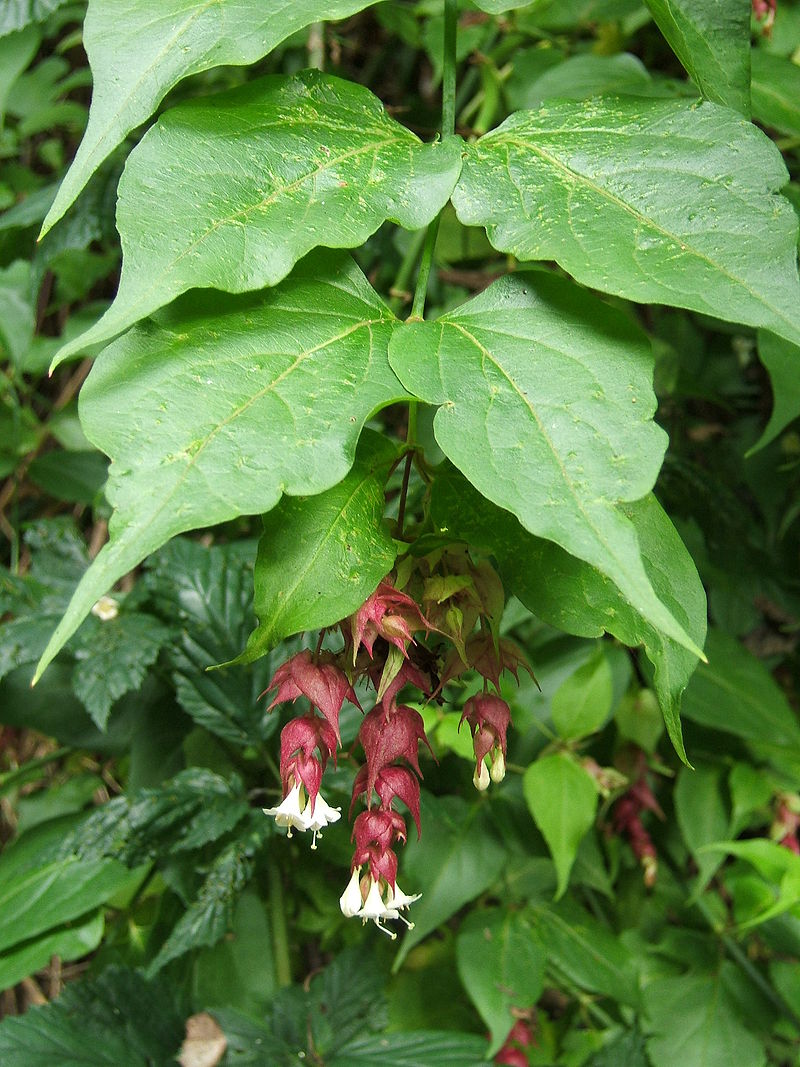 It is a flowering shrub suitable for growing in a pot with a diameter of at least 30 cm. The specific potting soil rich in nutrients should be well drained at the bottom with a layer of sand, coarse gravel or expanded clay. Watering should be done more frequently to avoid water stagnation, which is dangerous for the health of the roots. In winter, the plant should be moved to a bright but frost-free place. To favor the emission of new shoots and the production of flowers, the Leycesteria should be pruned in spring, shortening all the branches by at least one third of their length.

The plant should be repotted every year in March or when the roots of the plant come out of the drainage holes of the watering. A larger pot is chosen than the previous one and new, fresh, nutrient-rich soil is used.

Multiplication of the Leycesteria

New specimens of this characteristic ornamental plant can be obtained by seed, division of the tufts and by semi-woody cutting.

Sowing takes place in spring, towards March, in a cold seedbed containing a suitable substrate kept humid and placed in a warm place with a temperature not lower than 15 ° C.

When the seedlings are large enough to handle, they repatch into individual pots and grow in them for a year before planting.

An easy vegetative technique that allows to obtain already developed plants that produce flowers right away. In autumn or at the end of winter it is enough to extract the plant from the ground and divide it into several well-rooted portions and immediately place them in a permanent home.

New plants of Leycesteria can be obtained by agamic or vegetative way by taking cuttings of mature wood, 25 cm long, in October, which, cleaned of the cauline leaves, are put to root in a cold box. Subsequently, the rooted cuttings are transferred to pots and grown in them for a year before planting them at the end of the following spring.

Leycesteria plants are planted in spring in well-drained holes approximately twice the size of the bread of earth that surrounds the root system. After the planting, the plants should be watered regularly to favor the rooting of the roots and subsequently only if the soil tends to dry out excessively.

The Leycesteria is pruned after flowering by shortening all the branches that have produced the flowers to ground level, above a fairly robust bud. Pruning stimulates the production of new basal and lateral shoots and promotes flowering.

Pests and diseases of Leycesteria formosa

The plants of Leycesteria formosa generally show good resistance to attacks by common animal parasites, however in the summer months, the leaves can be infected with rust and attacked by mites. Among the fungal diseases, in addition to rust, these plants fear root rot due to water stagnation in the cultivation soil.

Leycesteria is a low-maintenance shrub, in fact it should only be protected from prolonged frost with a mulch of straw or dry leaves and kept under control the humidity of the soil to prevent water stagnation from forming. Any infestations by mites or rust must instead be appropriately contrasted with specific products, preferably organic.

There are other very decorative species.

A species of Leycesteria formosa with a compact habit with branches covered with golden leaves that contrast during the flowering period with the pendulous inflorescences formed by white flowers, surrounded by burgundy bracts. Also in this species the flowers are followed by burgundy berries used for edible purposes. It is an ornamental shrub suitable for growing in the ground and in pots, both in full sun or at most in the bright shade, in the hottest hours of the summer months.

A deciduous shrub species native to Burma and which in full vegetative vigor is about 2 meters tall and wide. It has branches with leaves about 15 centimeters long, ovate, thin, pointed, light green on the upper side and glaucous on the underside. In late spring, from May to June, on the terminal and arched apexes it bears 5-10 cm long inflorescences, formed by numerous yellow funnel-shaped flowers with 5 rounded lobes followed by small green ovoid fruits, similar to gooseberries. The Leycesteria crocothyrsos should be grown in full sun, sheltered from strong winds. It suffers and is damaged if grown in open ground in areas where the minimum winter temperatures are below -5 ° C.

Leycesteria plants are used for ornamental purposes as single elements and in groups to create hedges. Potted they are perfect for embellishing balconies, terraces and patios.

Its berries, even if bitter, are not toxic to humans or animals. 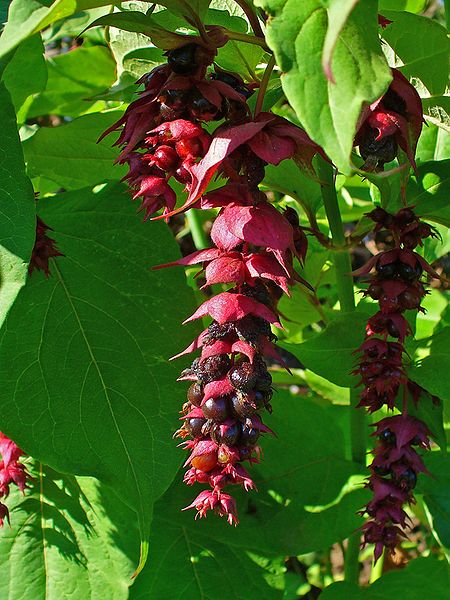 The Leycesteria formosa is named in honor of William Leycester, a distinguished judge of the Supreme Court of Justice of Bengal, a passionate horticulturist and first president of the Agri-Horticultural Society of India.

In addition to being known as Himalayan honeysuckle or nutmeg in bloom, this highly prized plant in English gardens is commonly called the Pheasant Tree.

The Leycesteria formosa in Italy is an almost unknown plant while in others such as Australia and New Zealand, it is subject to controls because it is considered very invasive due to the ease of dissemination.