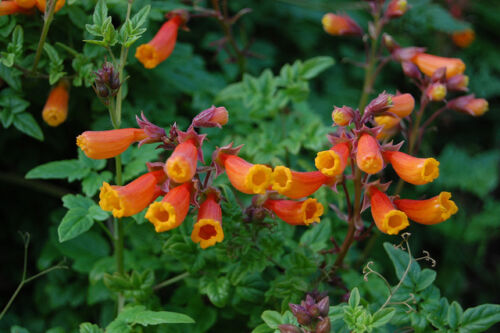 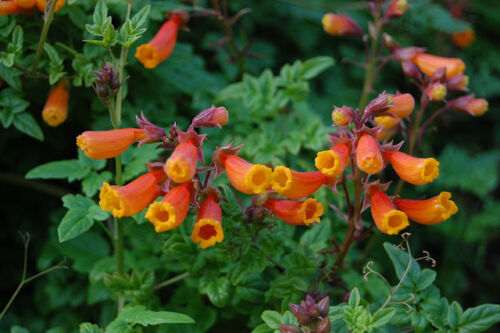 L’Eccremocarpus scaber, commonly known as Flower of Chilean glory, is a climbing plant with abundant summer-autumn flowering, to be grown in pots in areas with very harsh winter climates.

L’Eccremocarpus scaber is a flowering climber of the Bignoniaceae family, originally from Chile and widely spread in the semi-rustic state in Argentina and Peru. In Italy it is grown outdoors in all regions with a mild climate.

The Chilean creeper it is a perennial plant which in full development, after 2-5 years, reaches 3 meters in height. It has a robust and deep tuberous-fasciculated root. It has climbing stems, woody at the base, which as they stretch upwards emit numerous flexible and thin lateral jets covered with a light down.

The leaves, bipennatosette and oval, mostly glaucous and light-dark green in color, alternate along the stems and end with long green tendrils that attach themselves to any support: walls, pergolas, trellises and railings. The leaves are 2 cm long and have evident veins on the leaf sides.

THE flowers they are red-orange in color and appear on the ends of the branches united in number of 10-12 in terminal racemes: they have a tubular shape with slightly waxy petals, red in color with slightly rounded yellow lips. In their places of origin, the flowers are a good source of food for hummingbirds. 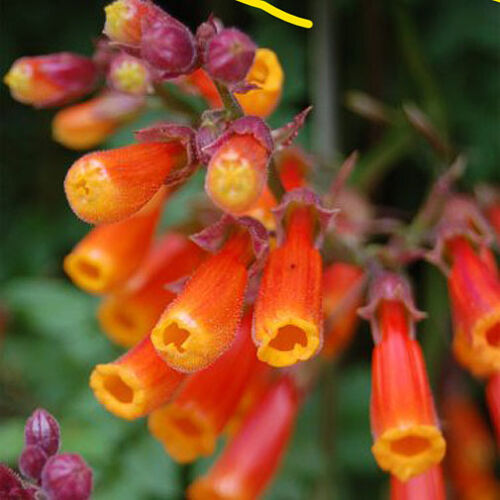 THE fruits they are wrinkled or warty, shiny and oval capsules, about 2 cm thick and 4 – 4.5 cm high. The capsules contain small seeds and persist on the branches for a long time.

THE seeds, black and winged, they are scattered by the wind but can also be harvested in early autumn and used for planting indoors at the end of winter.

The Chilean Creeper blooms profusely from spring to autumn, from June to October. 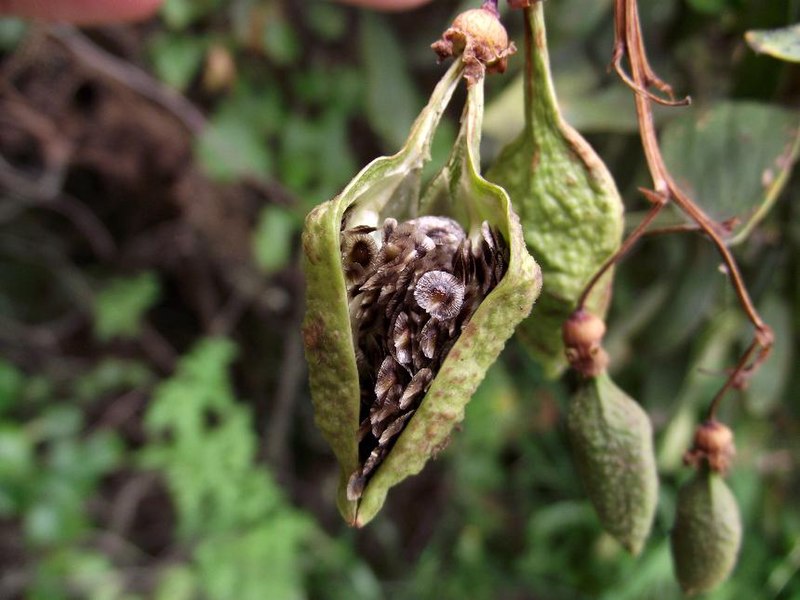 It is an exotic plant that loves a temperate climate, full sun exposure but sheltered from strong winds. Grown in the shade, the plant slows down and struggles to flower. It tolerates summer heat well as it dries up and dies if the cold is intense and the frost prolonged.

Likes fresh, fertile, well-drained soil with neutral or slightly acidic pH. The optimal growing medium is a mixture of garden soil, sand and a good dose of nutrients.

Eccremocarpus scaber, as previously mentioned, loves slightly humid soil, therefore it should be watered regularly, especially during dry periods and in summer. In winter, watering should be reduced or suspended and then regularly resumed in early spring. In dry soil, the plant suffers in particular when the heat is intense.

It is a climber that needs many nutrients in order to grow vigorously and quickly, therefore at the beginning of spring the soil must be enriched with a good dose of mature manure useful for the plant for vegetative restart and flowering.

This gorgeous climber, also known as Chilean vine, it is suitable for outdoor cultivation in the open ground in regions with a temperate climate while in those where winter temperatures are very rigid it should be grown in pots so that it can be easily stored in a greenhouse or inside the house behind a window exposed to south.

The pot, preferably in terracotta and, with a diameter of at least 40 cm, must be filled with a specific draining compost. Watering should be done regularly and frequently until the end of flowering and then gradually reduced to once every two or four weeks until the beginning of spring. The soil must be enriched with essential nutrients by administering a specific liquid fertilizer for flowering green plants, obviously diluted in the watering water.

If the plant is grown as a perennial, repotting should be done every 2 years or when the roots come out of the pot holes. New, fresh, fertile soil and a new, wider, deeper container should be used.

The multiplication takes place by seed in a protected seedbed in February-March, in May directly outdoors. New specimens can also be obtained in summer by cuttings in summer.

Sowing in a protected seedbed

It is carried out from the end of winter to the beginning of spring by distributing the seeds on a specific substrate (sowing mix for seeds). then covered only with vermiculite.

The seedbed, covered with a transparent sheet, is then placed in a bright place with a constant temperature of 15 ° C.

The sowing compost must be kept moist until germination which usually takes from 3 to 8 weeks. After the appearance of the shoots, the sheet is removed and the seedlings are left to strengthen up to and then transplanted into small pots before planting them as a permanent home.

Eccremocarpus scaber can be sown outdoors, directly in the open ground, in the month of May or when late frosts are completely avoided.

The seeds are distributed in the finely worked, well-drained and nutrient-rich soil, at a distance of 30 cm from each other.

The seeds are covered with fine soil which is always kept humid. The new seedlings of the Flower of Glory must be accompanied by a brace and generally will produce flowers from the first summer.

New plants of Eccremocarpus scaber are obtained agamic or vegetative by taking cuttings of apical twigs, about 15 cm long. The cuttings bearing only the apical leaves are put to root in a mixture of sand and then must be left to overwinter indoors until the following spring.

Eccremocarpus scaber should be planted in pots or in the ground in late spring in a hole suitable for the size of the root system. The planting site must be sunny or partially shaded in the hottest hours of the summer months.

The Chilean glory flower can be grown with other climbers or vines such as some varieties of roses, Clematis or Passiflora.

Eccremocarpus scaber cultivated as a perennial climber should be pruned every year to favor the emission of new lateral shoots and the production of flowers. Generally, old branches are shortened up to 60 cm from the ground while those dry or damaged by parasites and cold are cut off at the base. Young plants are also pruned during the first spring after sowing to stimulate the production of basal shoots.

It is a robust climber, resistant to fungal diseases but sensitive to attacks by mites and whiteflies, parasites that infest especially the most tender shoots.

The climber or flower glory of Chile is a plant that in order to climb requires a trellis or other structure on which to grow and where it is grown in the ground, in the colder months, it must be protected at the base of the soil with a layer of straw mulch or dry leaves. It should be protected from any attacks by the whitefly with neem oil or another ecological insecticide.

In addition to Eccremocarpus scaber, the most common climber of the genus, there are also other evergreen and semi-rustic specimens that produce yellow, pink and red flowers. 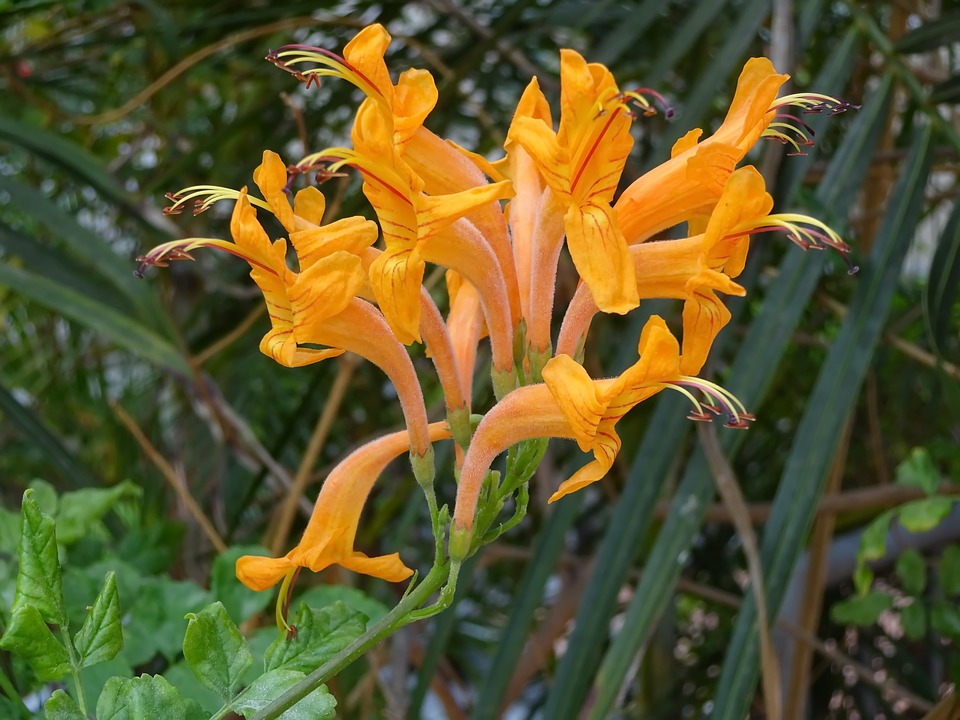 Eccremocarpus scaber is a perennial climber often grown as an annual close to fence walls, pergolas, trellises and other types of support. Potted the Chilean vine is perfect for embellishing balconies, terraces and patios.

The scientific name of Eccremocarpus refers to the shape of the fruit and derives from the Greek ekkremes which means pendants and carpus which means fruit. The specific epithet scaber instead refers to the coarse or rough or raw integument.
The Chilean creeper, first described by Spanish botanists Hipólito Ruiz López and José Antonio Pavón, is also known as: Chupa-chupa, Lorito, Voqui, Calampelis scaber, Flower of Chilean glory or Chilean creeper.

Eccremocarpus scaber is a plant that, due to its very rapid growth and propagation, is considered invasive and for this reason its cultivation is prohibited in many countries of the world.