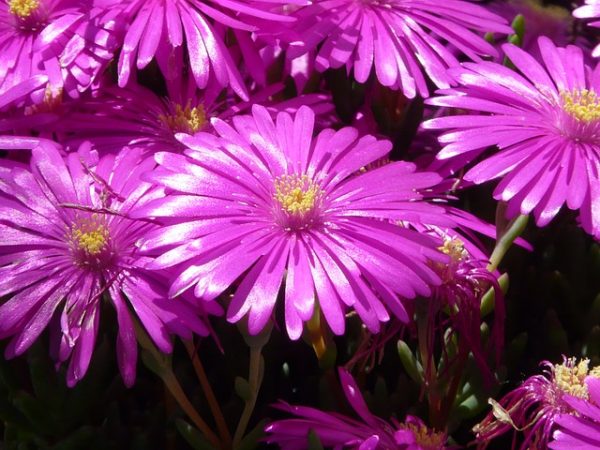 The mesembriantemo it is a succulent plant appreciated for its rich summer flowering, easy to grow in pots and in the open ground in rock and coastal gardens.

General characteristics of the Mesembrianthus

The mesembriantemo, scientific name Mesembryanthemum, is a succulent plant belonging to the Aizoaceae family native to South Africa. 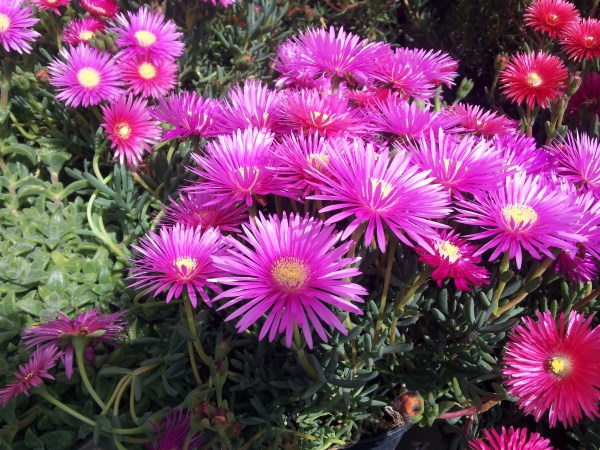 There plant it has a creeping habit and is characterized by very fast growth. It has a robust fasciculated root which over time tends to emit long adventitious roots.

The aerial part is formed by numerous consistent and fleshy prostrate-ascending stems, of a light green-silvery color.

The stems of this plant in the winter they change color taking on a brick-red hue. 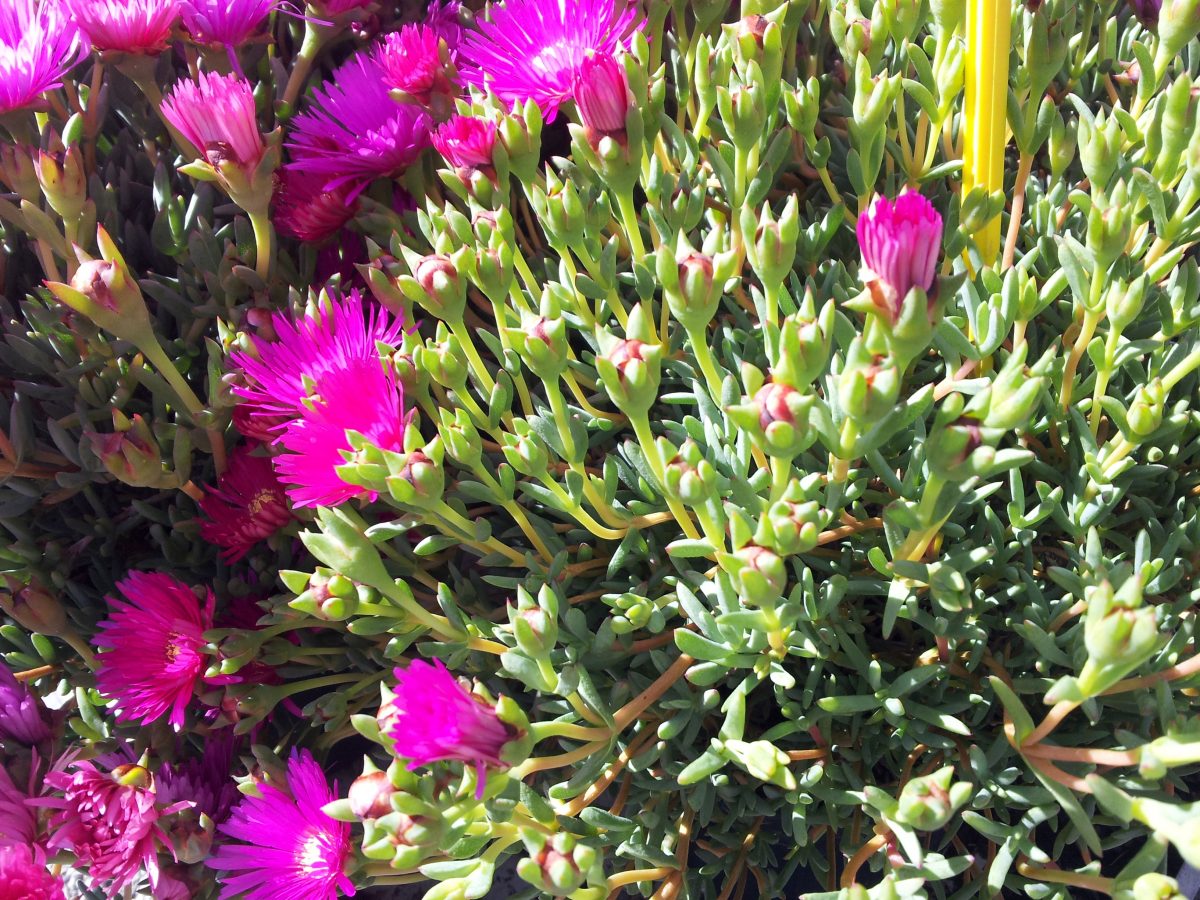 The leaves narrow and long they cover the main stems and the various branches from the base to their apexes. The leaves of the mesembriantem are also greyish green in color and are also covered with a thin layer of bloom. 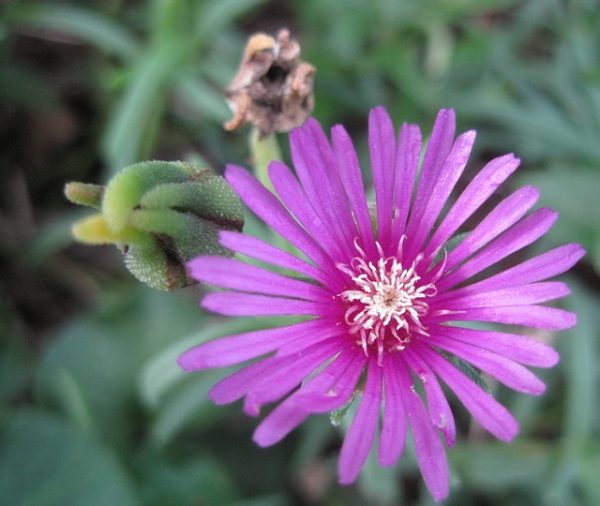 THE flowers, similar to those of Delosperma and Carpobrotus or Hottentot fig, are large daisies that bloom at the base of the leaf axils or on the apexes of the stems. 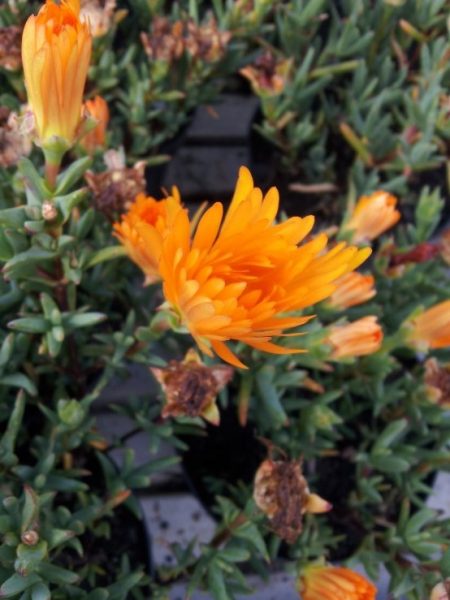 THE flowers they have a corolla made up of numerous long ligulate petals that form a crown to a central button and to long, very showy yellow stamens.

The color of the flowers is usually deep pink but in some species it is also white, yellow, deep orange and bright red. The flowers open in the morning when the sun rises and close shortly after sunset to systematically reopen in the morning for at least seven days, at night they give off a pleasant scent.

You may be interested in: Indoor coffee plant – Coffea arabica 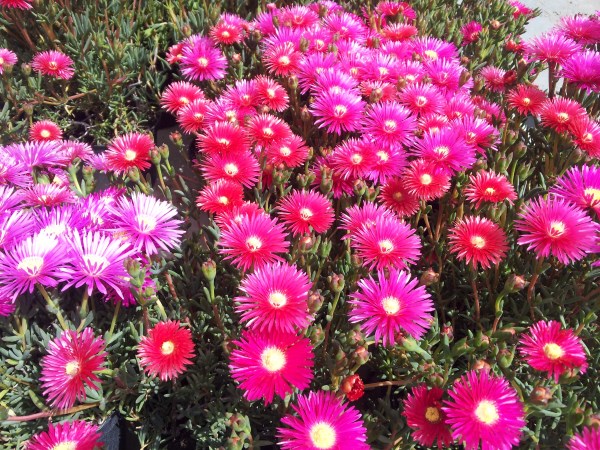 The flowers are followed by the fruits, small capsules containing the seeds.

The seeds are small, dark and with an excellent germination capacity.

The Mesembriantemo blooms from May to October and in areas characterized by a mild climate, flowering continues until late autumn.

The Mesembriantemo, like all other succulent or succulent plants. loves sunny places for many hours a day and a temperate climate. It is also suitable for seaside gardens, as it can withstand intense heat, saltiness and brackish winds. It fears the frost of winter and cold drafts. The mesembriantemo grown in pots should be placed in bright and warm places but away from direct sunlight.

It is a succulent plant that, in order to grow without problems, needs a loose, light and well-drained soil mixed with sand or coarse gravel. In too compact and poorly draining soil, the root system suffocates and rots.

The mesembriantemo grown in the ground even if it is satisfied with rainwater must still be irrigated in periods of prolonged drought; if you want to prolong flowering. The plant grown in pots needs more frequent and regular watering but only if the soil is completely dry. In autumn-winter, the period in which the mesembriantemo enters vegetative rest and the water supply must be reduced to the indispensable minimum. 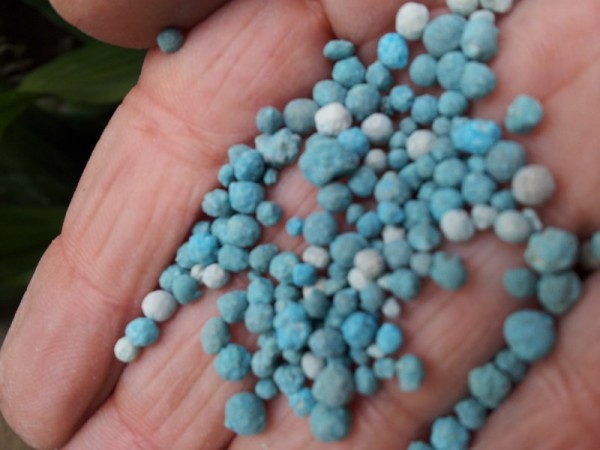 To stimulate the emission of new shoots and flowers, every 3 -4 months, administer a slow release granular fertilizer specific for succulent and flowering plants, rich in macroelements such as nitrogen (N), phosphorus (P), potassium (K ). If the plant is fertilized it often produces many leaves at the expense of flowering. 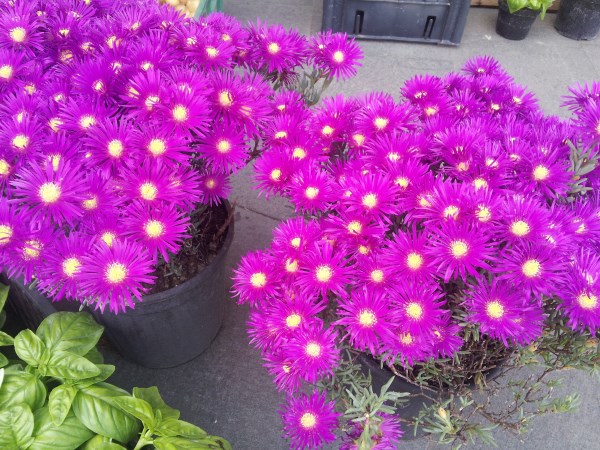 The plant propagates by seed, by cutting and by division of the tufts.

There sowing it is carried out in March in a protected seedbed at the temperature of 15 its small fruits are full of seeds which, in nature, are scattered when the capsule opens. The operation must be performed in spring, around April and the seeds are scattered on the ground, without burying them.

After germination, when the new mesembriantemo seedlings are strong enough and about 5 cm tall, they can be repotted in boxes until May and then planted permanently in the ground or in pots. In April the seeds of Mesembriantemo can also be sown directly at home, subsequently thinning out the seedlings at a distance of 30-40 cm.

Multiplication by cutting of branch is carried out in autumn and consists in rooting, in a mixture of sand and peat, some branches about 10 cm long, healthy and vigorous, cut directly from the plant with well-sharpened and disinfected scissors. Before being buried, the cut branches must be left to dry in the shade for at least 1 day.

The prostrate mesembranthemum can also be propagated by dividing the tufts.

It is a quick and practical technique that ensures plants with the same genetic characteristics.

sow under glass, in March, at a temperature of 15 ° C. The seedlings are repotted in boxes and strengthened, before planting them in May. In April it can also be sown directly at home, then thinning out the seedlings at the desired distance. 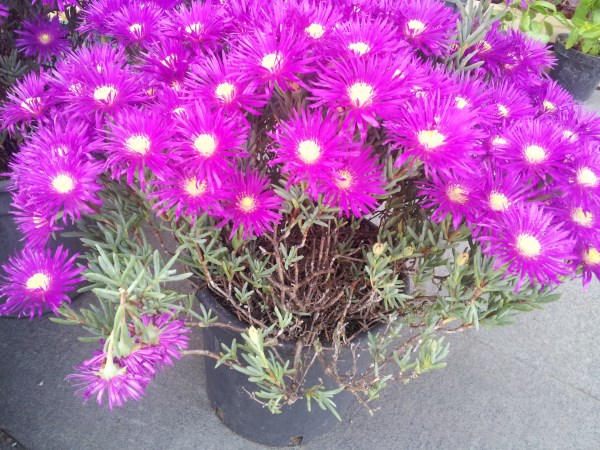 It is a succulent plant suitable for growing in pots (planter or low bowl) containing soil rich in dissolved organic substance. mixed with sand. The ideal growing medium for growing in pots is a mixture consisting of 2 parts of peat and 1 parts of sand or coarse gravel. The sand and / or crushed stone should be placed on the bottom of the pot to avoid the stagnation of water which causes the rotting of the roots.

Repotting should be done when the plant has occupied all the available space or when the roots come out of the drainage holes of the sewage. In general, repotting is done every two years in spring. The new pot must be larger than the previous one, fresh and moist soil. 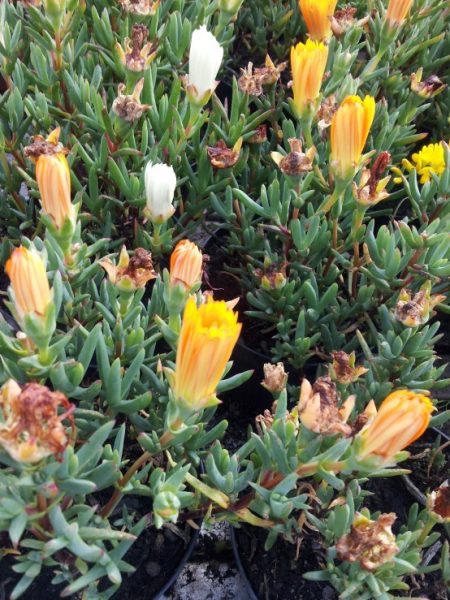 The mesembriantemo does not require real pruning. Only the dry stems should be cut and to favor flowering the withered flowers must be eliminated by trimming the apexes with well-sharpened and disinfected scissors. Healthy stems can be used for cutting. 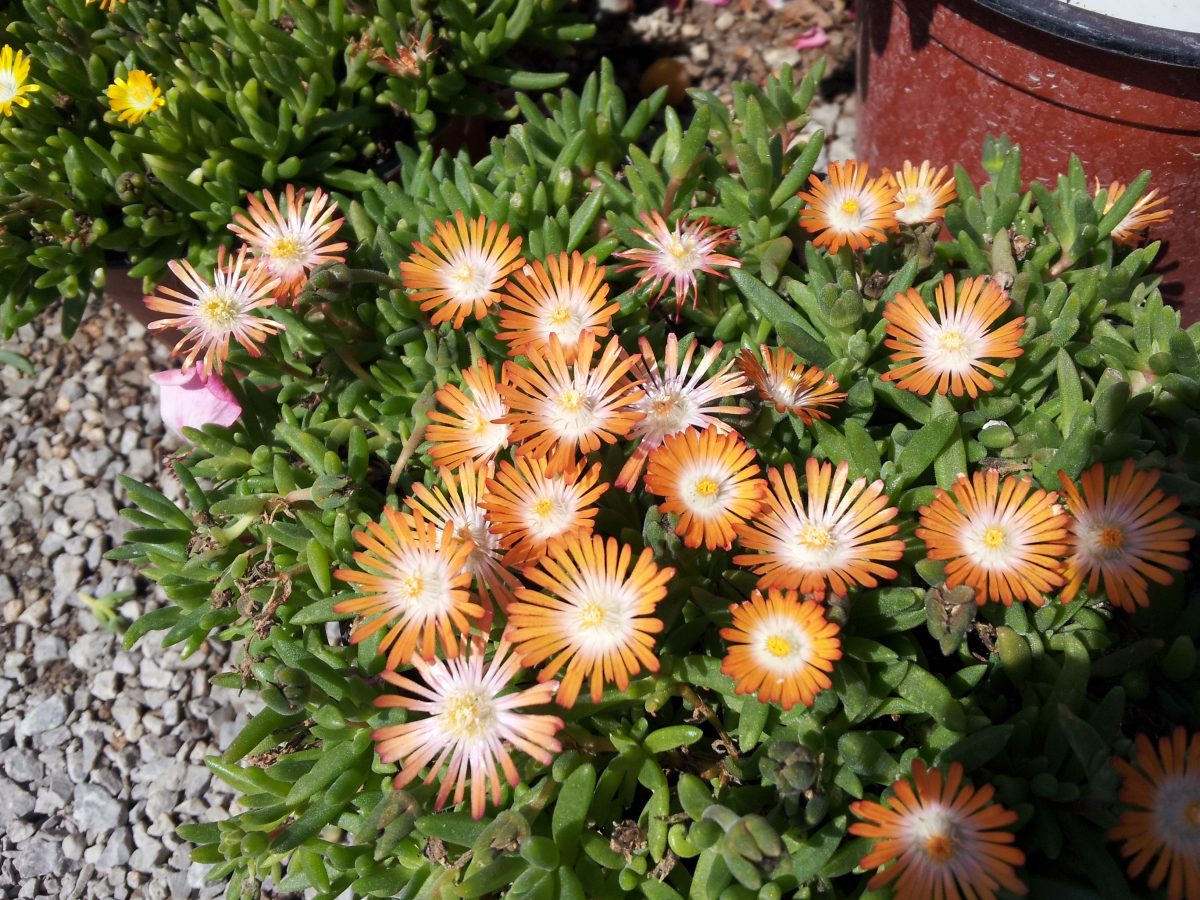 Diseases and parasites of Mesembrianthus

The mesembriantemo fears the attack of aphids due to the excessive humidity of the air; suffers from root rot if the soil is not well drained; it fears the cochineal which generally lurks in the interstices of the leaves and is sometimes attacked by some viruses. The mesembriantem is also sensitive to some viruses that cause serious and irreparable damage.

In the case of fungal and parasitic diseases, the foliage of the plant is sprayed with specific products based on sulfur and white oil or with biological products such as the pyrethrum pesticide or the nettle pesticide.

If the plant shows symptoms of viral infestation the only valid remedy is to uproot it from the ground and burn it to avoid the spread of disease to neighboring plants.

Among the many species of this beautiful succulent plant we remember some varieties spread spontaneously or cultivated for ornamental purposes:

An annual species with a prostrate habit and narrow cylindrical leaves that blooms in summer producing white, orange or red flowers that close after sunset. It is the most widespread species and used for borders, flower beds and for wallpapering walls. It is sown in early spring from March to early May, depending on the climate. It should be grown in full sun in sandy and well-drained soils. 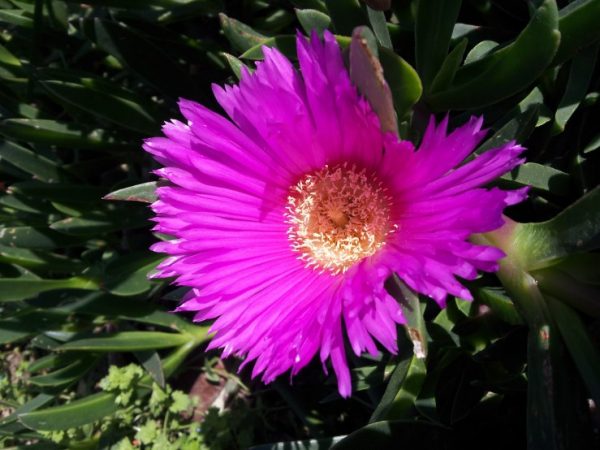 This beautiful specimen commonly known as the Hottentot fig, is a variety widespread also in Italy in a spontaneous state, with long and fleshy leaves. From May to July it produces large, very decorative purple-red flowers; 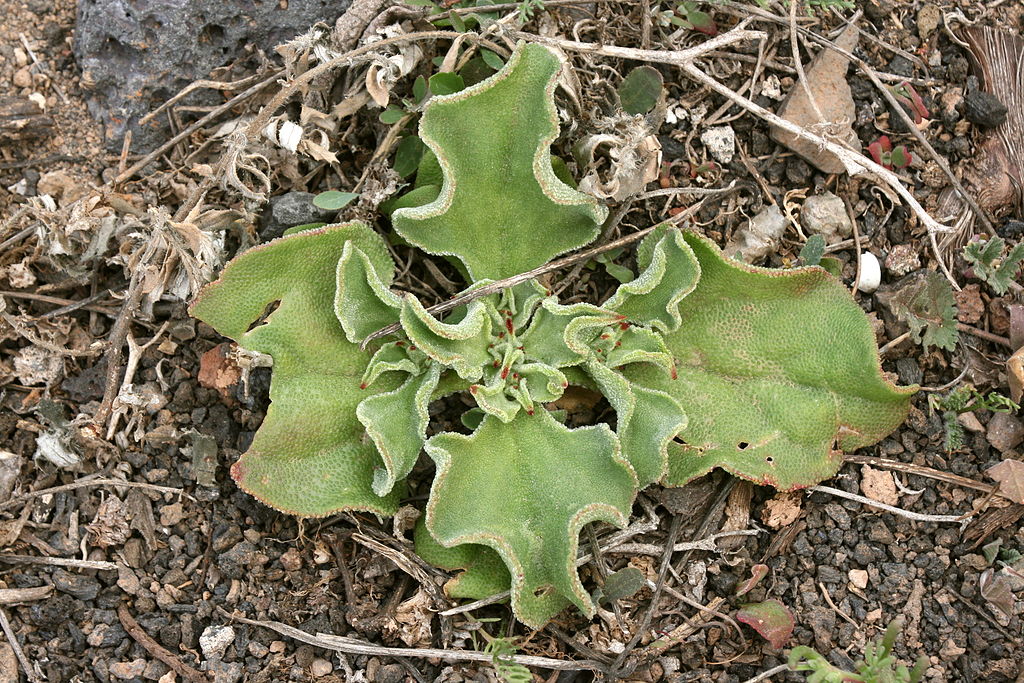 Originally from South Africa and commonly called crystalline grass oerba popsicle this specimen is an annual species. It has a reduced root system composed of very short roots and prostrate stems with oval and green leaves, sometimes red, covered by some water-filled blistering formations similar to ice crystals. In summer, from June to August, it produces white or pale pink flowers with a radial corolla. It grows vigorously in full sun, on sandy, clayey and even brackish soils.
It is very resistant to drought so it needs sparse and regular watering. The plant re-sows itself.

The leaves are edible and are still used in salad cooking or as spinach. The flowers are also edible and mainly used to decorate desserts. 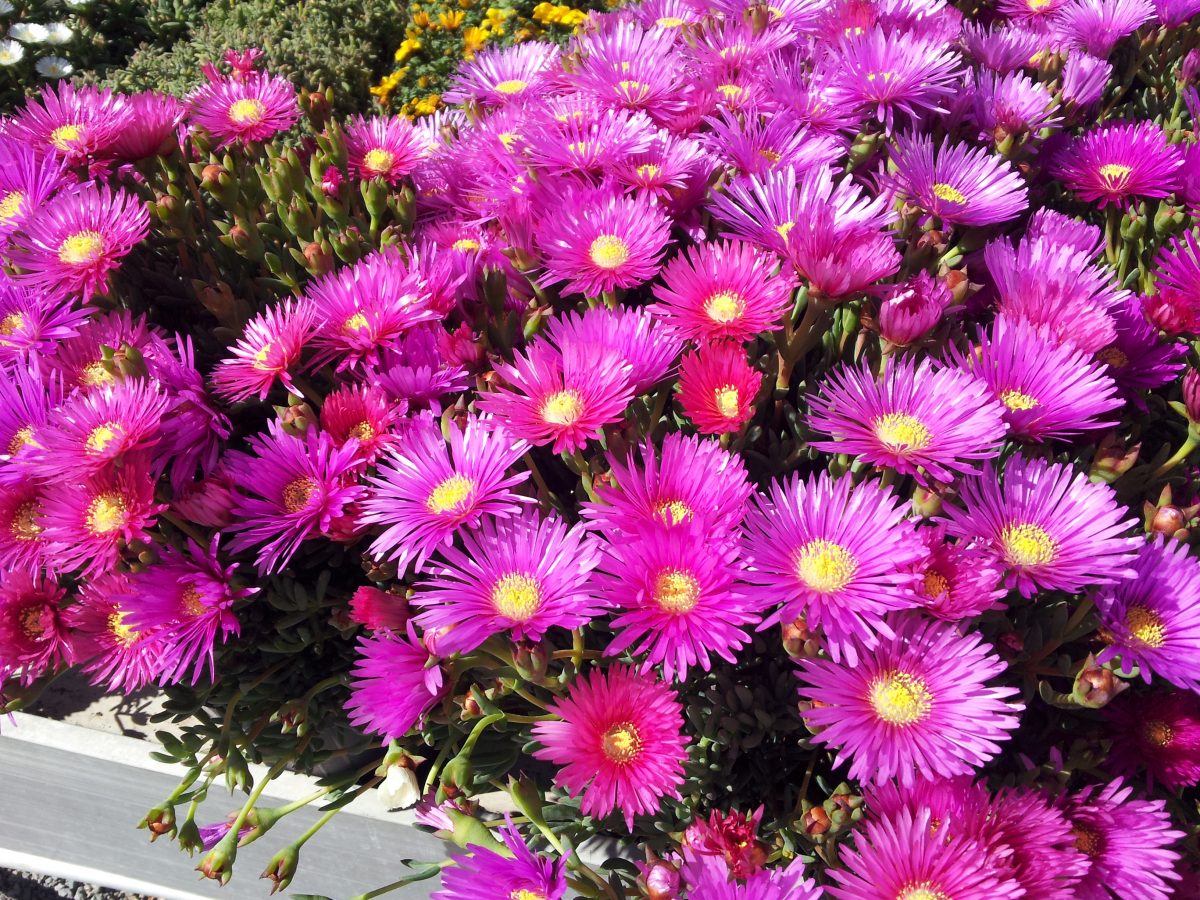 A perennial plant native to southern Africa, similar to Carpobrotus, 20-30 cm tall. It has prostrate-ascending stems covered with fleshy cuneiform leaves. From May to July it produces beautiful yellow or purple flowers. It should be cultivated in full sun, on sandy, clayey and even brackish soils.

The new cultivars with double-colored petals are also beautiful.

An annual species native to South Africa. In full vegetative development it forms thick cushions about 10 cm high. It has narrow, cylindrical dark green leaves. From June to August it produces large white or deep pink flowers, with a dark center, 4 cm wide.

The mesembriantemo is a symbol of love and therefore is the perfect gift for your loved one. 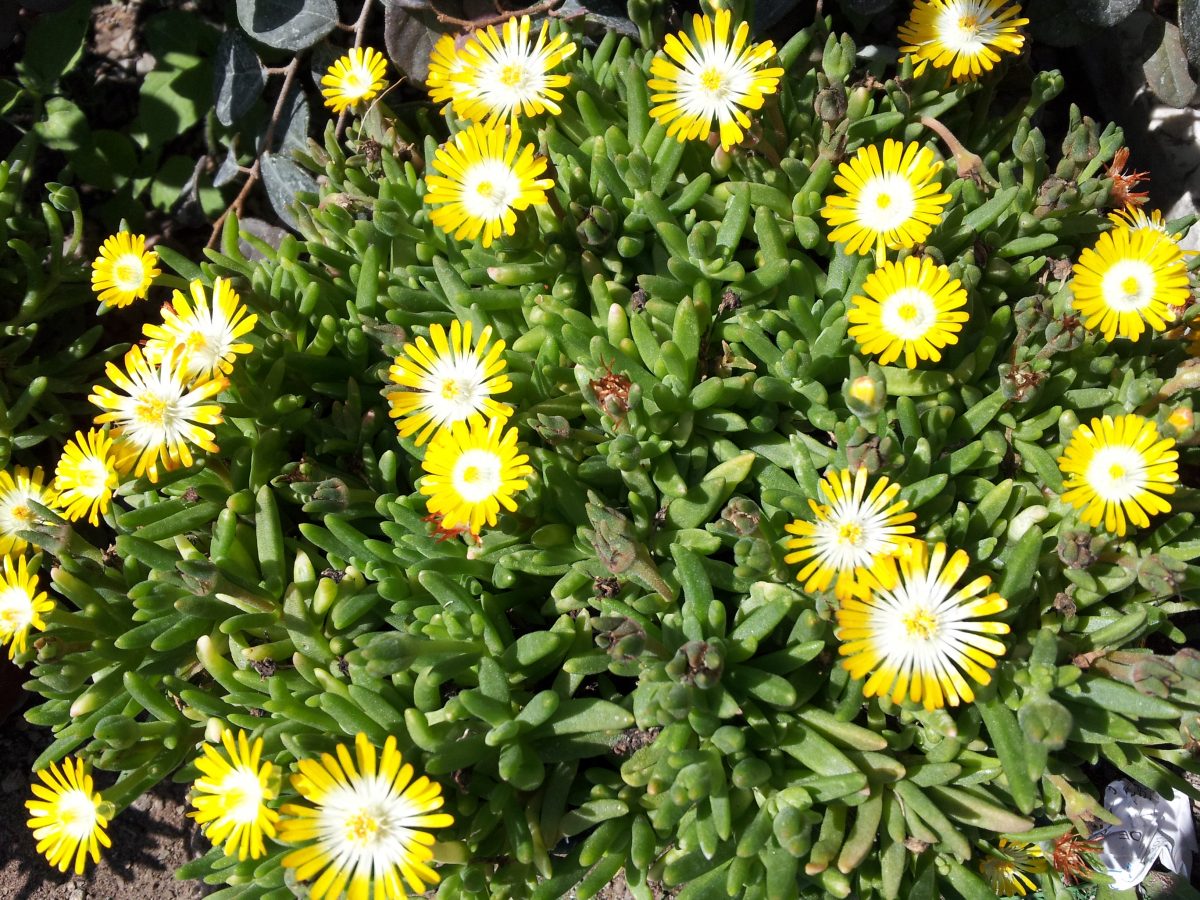