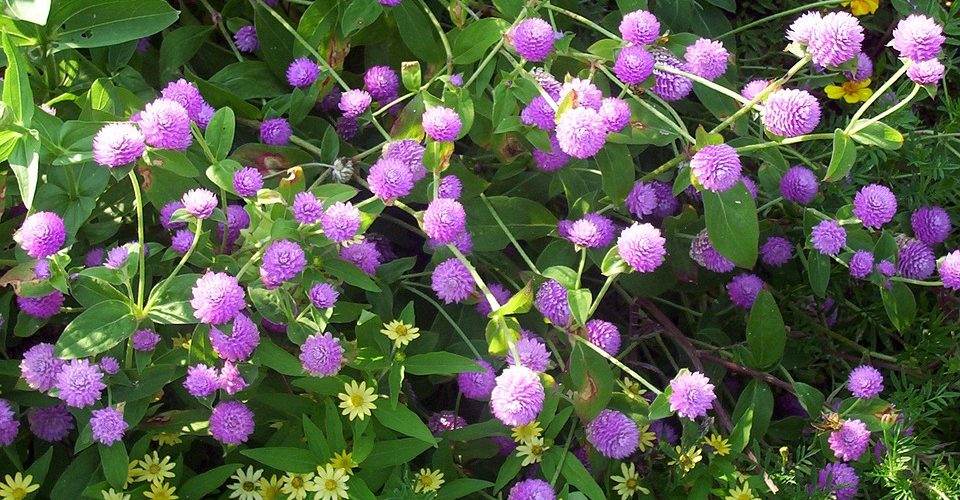 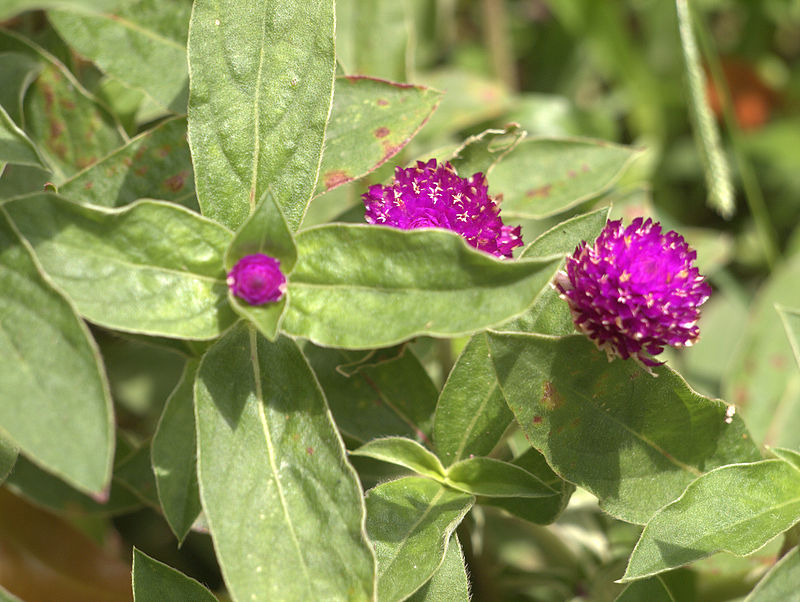 There Gonfrena commonly called false clover It is a flowering plant grown in the garden and in pots and appreciated for its beautiful flowers used fresh or dried for floral compositions. 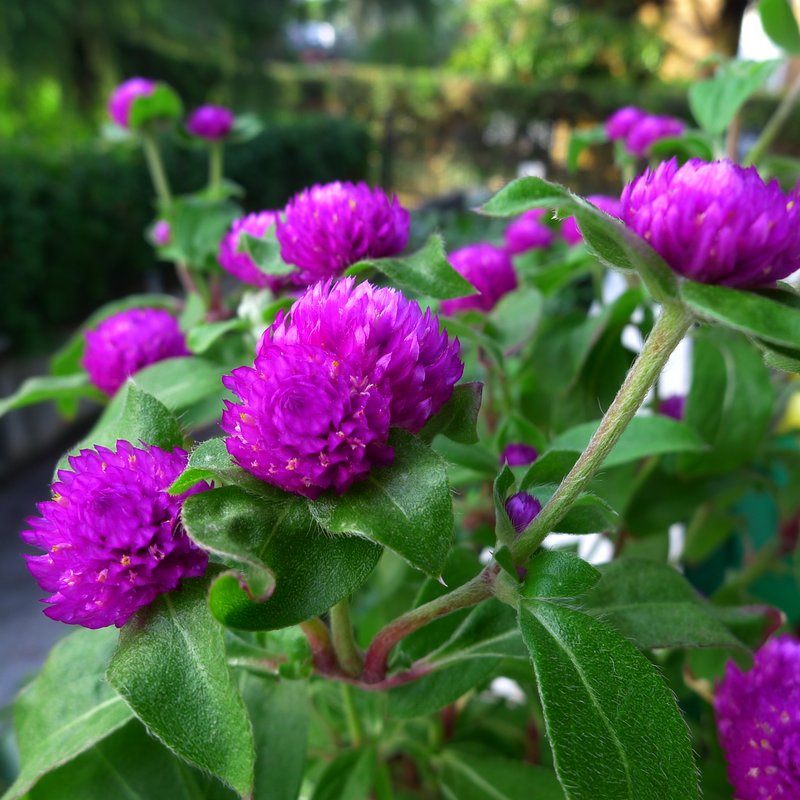 To the genre Gonfrena belong several species of herbaceous plants of the Amaranthaceae family originating from India and Central America and widespread in Europe and in Italian gardens.
The most cultivated variety is the Gomphrena globosa known as false clover, a flowering plant about 60 -70 cm tall and bushy.

The gonphrena is an annual herbaceous plant with a robust fasciculated root and numerous hair-like adventitious roots. 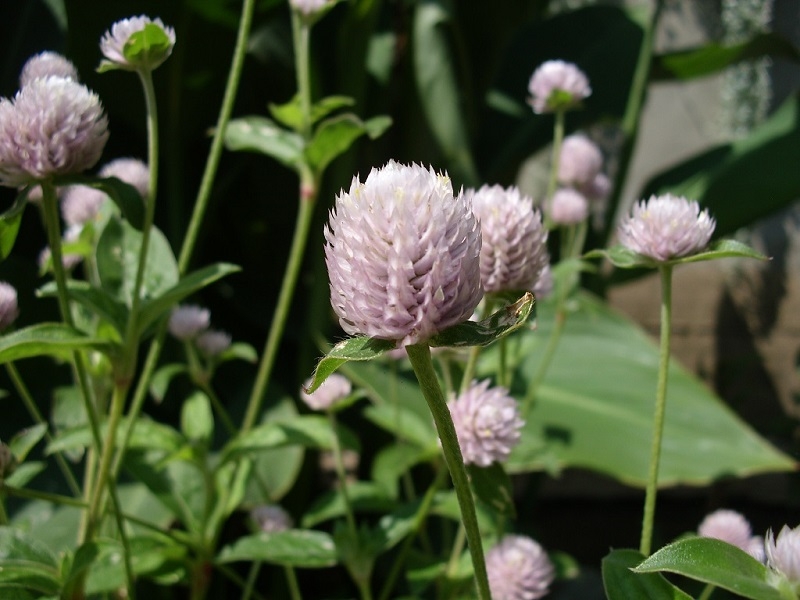 The aerial or epigeal part of the Gonfrena plant is formed by thin rigid stems, erect, variously branched of a silvery green color due to a thick whitish down that covers them for their entire length which varies, depending on the species from 40 to 60 cm.

The leaves, similar to those of the Zinnia, they are ovate – lanceolate and of a dark greyish green color. Even the leaves, like the stems, are covered with diffuse hair both on the underside and on the underside. Gomphrena leaves are sticky to the touch. 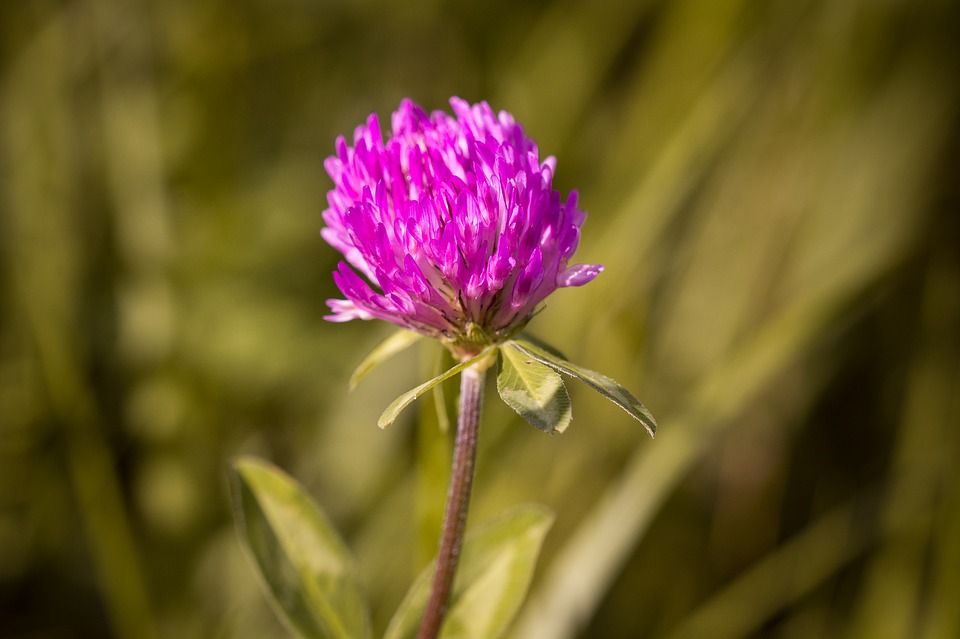 THE flowers, gathered in globose flower heads, they are formed by numerous ligulate and thin petals whose color can be violet, lilac, pink, white or red.

The plant begins to bloom from late spring, between May – June, until the end of summer. 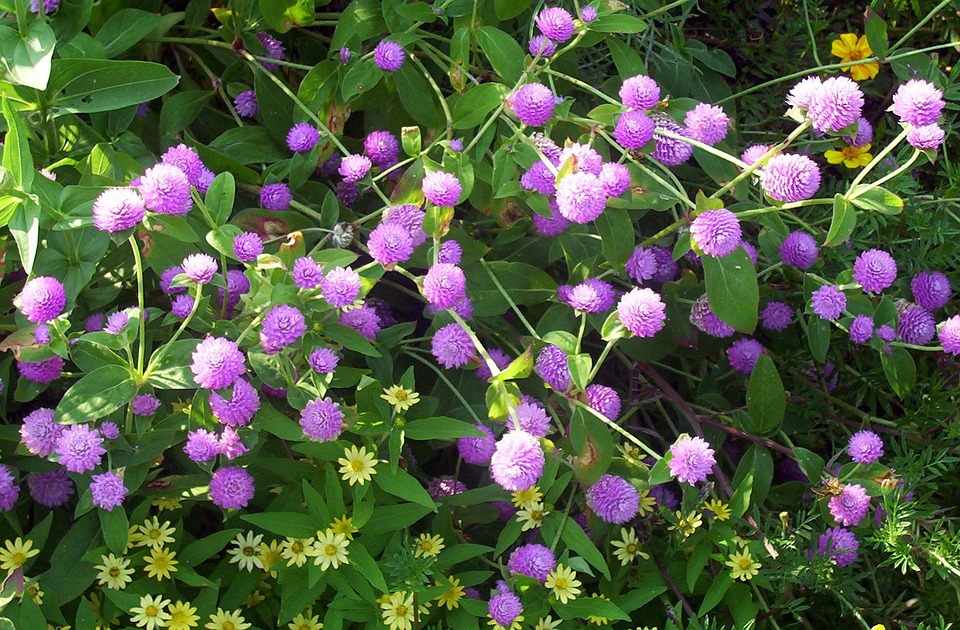 It prefers bright and sunny places. It does not tolerate temperatures below 10 ° C; it fears drafts and therefore should be bred close to walls well sheltered from the wind.

it grows well in common garden soil, preferably calcareous, light, rich in organic substance and well drained. The ideal substrate for the pot cultivation of the Gonfrena is a mixture composed of earth, peat and coarse sand.

Gomphrena or false clover is a rustic plant that is generally satisfied with the rains but in periods of prolonged drought and in summer it is advisable to water it regularly while avoiding wetting the leaves. Plants grown in pots should be watered more often to keep the soil moist at all times. 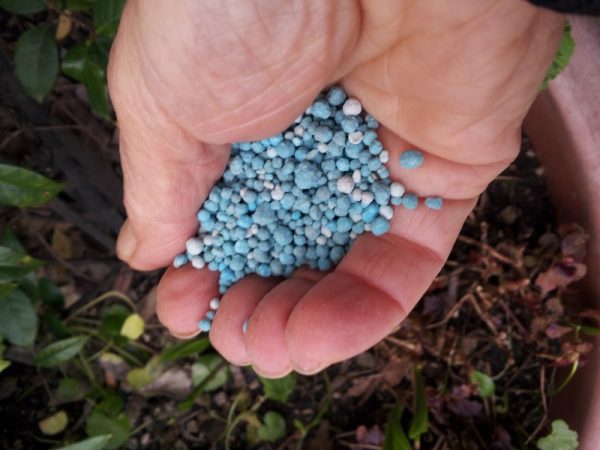 Throughout the vegetative period, to stimulate growth and flowering, every 15-20 days, administer a specific fertilizer for flowering plants appropriately diluted in the watering water. Alternatively, once a month or every 40 days, distribute at the foot of the plant a slow-release granular fertilizer rich in macro-elements such as nitrogen (N), potassium (K) and phosphorus (P) and also micro-elements such as iron (Fe), manganese (Mn) and others.

It is a rustic plant that can also be grown in pots in sunny positions, in the specific soil kept constantly humid but not soggy. It should be watered every 2-3 days in the summer months. It should be fertilized every 15 days with a specific fertilizer for flowering plants until it enters vegetative rest or as soon as the temperature drops below 12 ° C.

The gonfrena is a herbaceous plant with an annual vegetative cycle and therefore does not need to be repotted. To obtain well-developed and strong plants, however, it is advisable to grow it in large planters or in pots with a diameter of at least 50 cm. 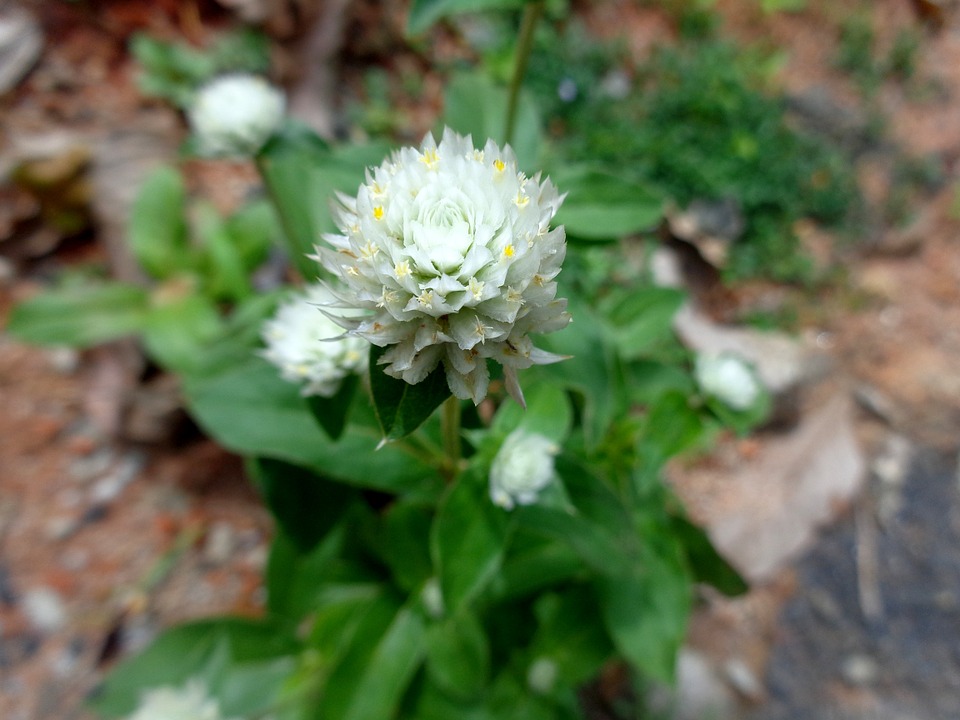 The Gonfrena reproduces by seed in seedbeds at the end of winter or directly in the ground in late spring, a period in which night frosts are completely averted.

If sowing is carried out in seedbeds, the sowing boxes must be kept in place with temperatures between 18 – 21 ° C for as long as necessary for the germination of the seeds.

To carry out the sowing directly at home, it is preferable to wait for mild days such as those at the end of April or the first ten days of May. In this case, the seeds must be buried about half a centimeter deep and spaced more than 20 cm apart to prevent the seedlings from competing for the nutrients necessary for their growth. When the seedlings are enough, thinning will be done.

Gonfrena plants obtained from seedbeds are planted in late spring towards May in soft and well drained soil and 15-30 cm apart.

To facilitate the emission of new flowers, trim the withered stems and manually remove the damaged and dry parts. 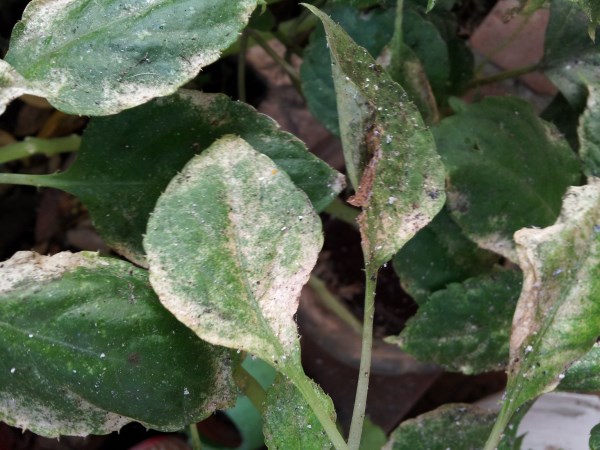 The tender shoots of the Gonfrena plant are a lure for snails. Among the animal parasites it is not afraid of attacks by aphids or cochineal.

The false clover it is sensitive to white disease or powdery mildew, a fungal disease caused by a too humid climate and generally manifests itself above all on the leaves in the form of visible whitish dusty deposits that compromise their aesthetics and development.

Extensive, yellow-brownish leaf spots can be caused by Cercospora a phytopathogenic fungus that generally affects eggplant, chard, spinach and other herbaceous plants such as plantain.

If, on the other hand, the Gonfrena plants appear small and deformed, they must be immediately eliminated and burned as they have been attacked by a fearsome virus that soon tends to infect all the others like wildfire.

In the event of a fungal infestation, spray the Gonfrena plants early in the morning or in the evening after sunset with sulfur-based fungicides (S). 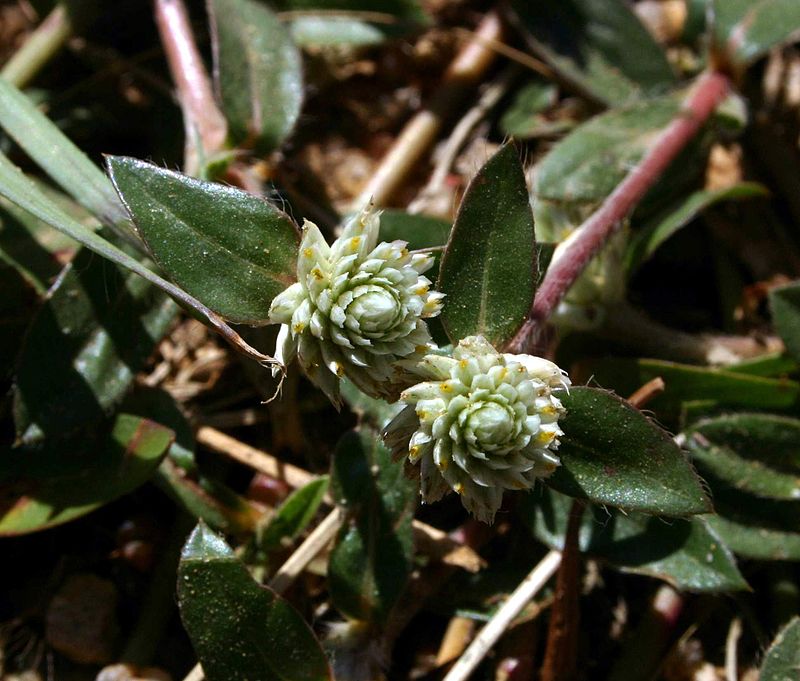 Among the many rustic species and dwarf hybrid cultivars used in gardening also as ground cover plants.

A variety native to America similar to Celosia. It has a creeping habit with hairy twigs and elliptical leaves. During the flowering period it produces white flowers and dry, indehiscent fruits are known as utricles containing small brown and shiny seeds. It is found in a rustic state on humid soils, near the banks of the river. It is suitable for cultivation in pots and in
naturalistic garden. 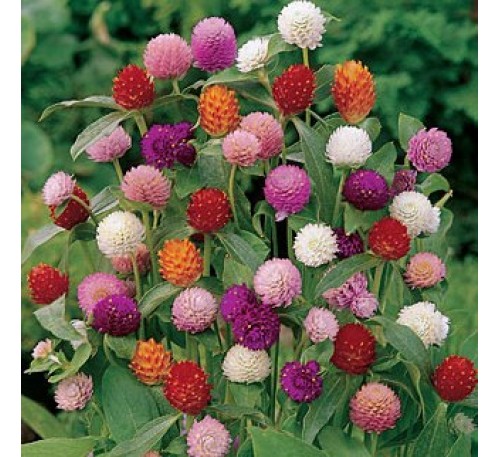 An average 25 – 30 cm tall variety has a ball-shaped habit. It produces creamy-white, pale pink or deep red flowers. It is a perfect plant for the garden in areas with hot and humid summers as well as suitable for dry conditions. It is also suitable for cultivation in mixed containers. It easily reproduces by seed.

Originally from the Amazon also known by the popular name “Paratudo” (good for everything or panacea for all ills) which stands out from the others for the production of large flowers with a more expanded corolla composed of thin and pointed orange petals.

The Gonfrena is used in gardening to embellish flower beds and also the interior of the house with its cut flowers.

Cut flowers can be dried in a ventilated place and used to create beautiful floral compositions.

The purple inflorescences of Gonfrena globosa were used in folk medicine as a remedy for different types of inflammation of the respiratory tract including bronchial asthma, acute and chronic bronchitis, whooping cough. 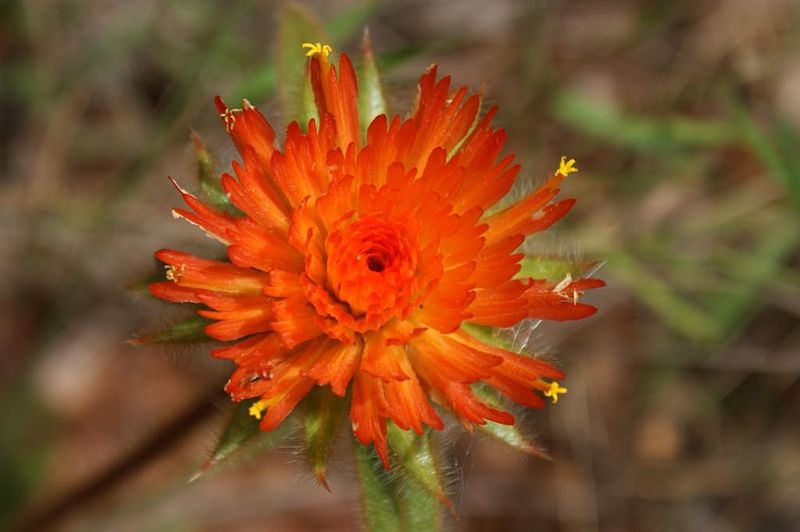 The name of Gomphrena globosa appears in some quotations by Pliny who first used it to designate a species of Amaranth. 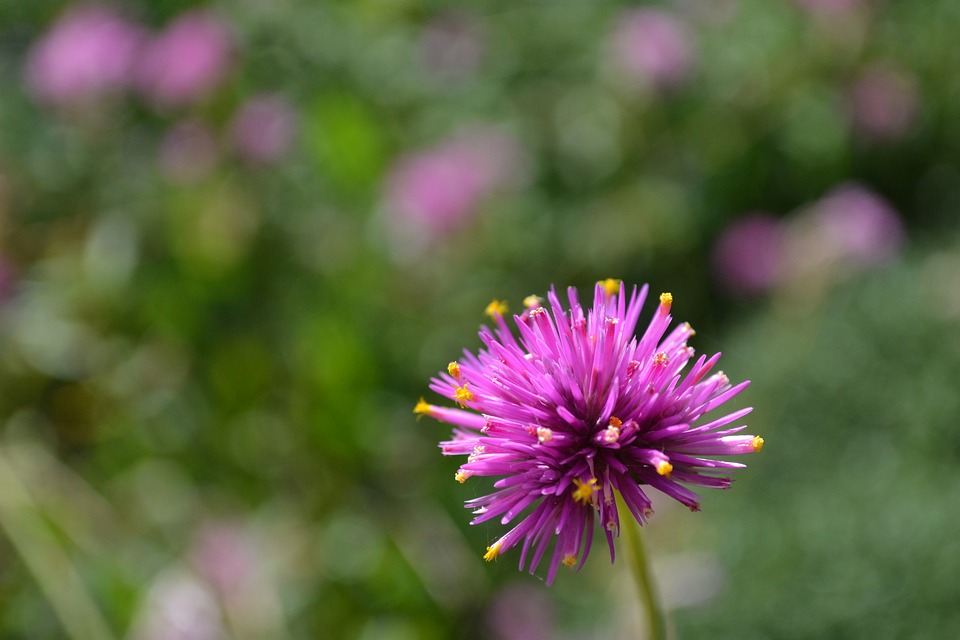 Meaning and language of the flowers of Gomphrena

The name of the plant derives from the Greek γόμφος which means swollen.

In language of flowers and of plants, Gomphrena is a symbol of immutability and immortality in reference to the persistence of its beautiful flowers.

What will keep red wasp away?

What will keep red wasp away? Plants like spearmint, thyme, citronella, eucalyptus and wormwood are all considered effective natural repellents. Similarly, peppermint oil and essential oil blends, like lemongrass, clove...